Some of you might be aware that Tim and I are planning a move (back) to Western Australia over the next couple of years in order to have a stronger connection to the earth and our family. I’ve been living in Europe for more than a decade and Tim has spent over half his life in Linz and we want to maintain our connections here, but it is time to get back to our roots. Our niece and nephew are growing up a town over from our planned destination and it will be amazing to be closer to our parents and siblings even if Australian ideas of “close” still mean half a day’s travel or more.

It will also be a chance for us to keep our fingers dirty more of the time and to build a flourishing home and garden system that is resilient against climate and socio-political changes. While we are both involved in making and growing things on a regular basis at home and within community spaces, the window sills of our apartment only offer so much growing area that is truly ours.

In particular, there are some permaculture-related goals that we want to put in play but which don’t work in our current location. While we have a worm farm that makes use of some of our food scraps and use renewable energy (go Austria!), we are still heavily dependent on municipal systems for the rest of our organic waste, on (regional) supply chains for food and would be very vulnerable if the electricity grid failed. Having more influence on our waste-management and energy systems and providing animal protein for us and our family in an ethical and scale appropriate way are responsibilities we’d like to take on. But generally, I’ve been considering the idea of a productive and resilient peri-urban block as just a hypothetical idea for the last months

So it is pretty funny, and at the same time an important step when one of those dreams became a fixed puzzle piece. One night last week we followed up on a Kickstarter project and spontaneously invested in a small bio gas system so that we can turn our future kitchen waste into fuel for cooking. I’ve been intrigued by anaerobic digestion for years and my interest grew when a friend I met on a permaculture course described how she fried her breakfast eggs using biogas. It must have been that vision and the crowdfunding head rush that prompted me to then back another Kickstarter for information about raising quails and plans to build the world’s best quail tractor system.

Quail Eggs! They are just glorious miracles as they are – but seriously that fried quail egg on nettle soup was so wonderful it made me want to keep my own quails. I already want to plant nettles in my garden – that is non-negotiable. Photo: Ruslan (2012) CC BY-SA 2.0

Apparently the biogas breakfast idea connected with another fond memory of being served nettle soup with a tiny fried quail egg on top. So there you have it, we are slowly turning dreams into at least the puzzle pieces of the life we will have in the future.

Of course, every action sets off a new change of questions and decisions – when one has multiple options beyond the municipal organic waste bin,  how does one prioritise where their waste goes? What goes to the worms or the quails and what goes straight to the bio-gas digester? How best to site and shield a biogas unit for year-round gas production (output drops in the cooler months) and even though it won’t explode, ensure that it is safely managed in a high-fire risk region?

And maybe more importantly, there is the question of how best to remain in the now when such exciting future plans become more real. Though that can simply be answered through caring for my current home system including worms and Seagull the Cat, who will have to stay here in Austria.

I mentioned the other day that besides the calendula that I dried and zucchini that I fried I had a bunch of other things from the garden that needed processing? Well amongst my harvest were beetroot and their leaves as well as some rainbow chard.

Normally I love sauteed chard and beet leaves – with the addition of lemon juice, garlic and maybe some toasted almonds they are delicious. Or maybe used as part of a spanakopita style pie? But on Sunday my normal desire for greens failed me and I needed to do something different with the leaves – and fast, the weather was hot and they were beginning to wilt.

The obvious answer was to get all wild and hippy and ferment the damn things.

Over the last year I’ve been playing around with wild fermentation and making things like kombucha and elderflower wine. I’ve successfully made traditional sauerkraut and fermented my own beetroot with great results.

But some things just don’t work out the way you think they could. 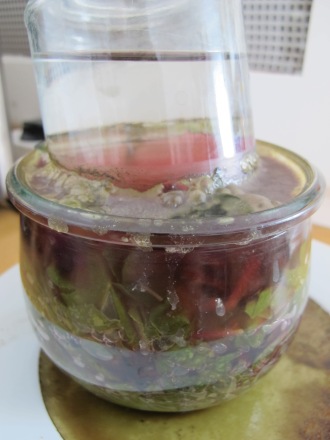 In theory it could have worked out – but ultimately it was like smelling and eating the bottom of a stagnant pond.

I went the normal route of salting and “massaging” the leaves to break down the cell walls and release the salty plant juice. And then – I carefully packed the shmooshed up leaves into a jar and weighted the leaves down and added a touch of brine to the top to make sure all the leaves were submerged.

And then I waited.

The last couple of days have been very hot in Linz and as a result my kitchen was close to 30° – things began to happen to the jar of leaves straight away. By the next day there was some foam and a strong odour of pond.

Pond – that’s really the only way to describe it – a little like the smell of our sailboat’s hull when she comes out of the Winterhafen. Pond – in the right place (i.e. near a pond) it is a smell that makes sense and can be not unpleasant – but in my 30° kitchen it was not something I was handling well. The normally earthy flavours of beet leaves had combined with water to make the wet earth flavour of mud.

Generally you have to wait a couple of days for more advanced fermentation to kick in and with it the nice souring that comes from the good lactic bacteria of successful fermentation. Maybe if the weather was cooler and I was more patient this could have happened. In the end though the combination of a very hot kitchen and the persistent smell of slime meant that I had to apologise to the food gods and take the experiment out to the compost bin.

Tim’s just headed off for a conference in India, so first thing this morning I went to my community garden plot to pull up some weeds and give some water to the surprisingly hardy vegetables and flowers I’ve managed to grow.

My harvest included rainbow chard, lettuce, beetroot, a couple of carrots, four snowpeas, some zucchini and their flowers, a few nasturtiums and borage and lots of calendula.

While I was there a fellow gardener mentioned that she had made her own calendula handcream with petals infused in butterschmalz (Austrian ghee). Once I got home I looked up some more information about processing calendula and laid out the flower heads on cardboard and took them up to the communal attic space to dry out. 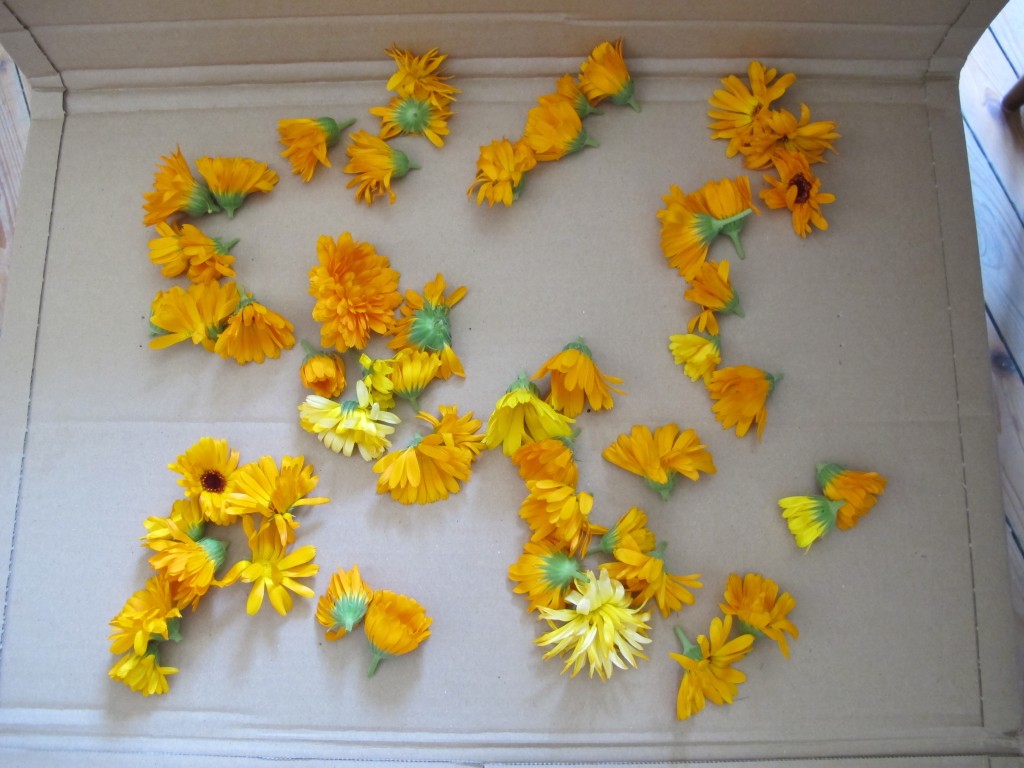 Then I had to do something with the rest of the produce – most of it can wait for tomorrow to be cooked, but the zucchini flowers had to be used straight away. At the time it seemed that deep frying them was the best way to go. However, I have never properly deepfried anything – but I do have a multicooker-rice and yoghurt making machine that also functions as a deep fryer.

Deep frying four zucchini flowers seemed like a waste of time, energy, batter and oil. so in addition to making batter and a feta and zucchini butter filling for the zucchini flowers, I found a green pepper, some sweet potato and decided to fry up some of the nasturtiums and calendula blossoms too. 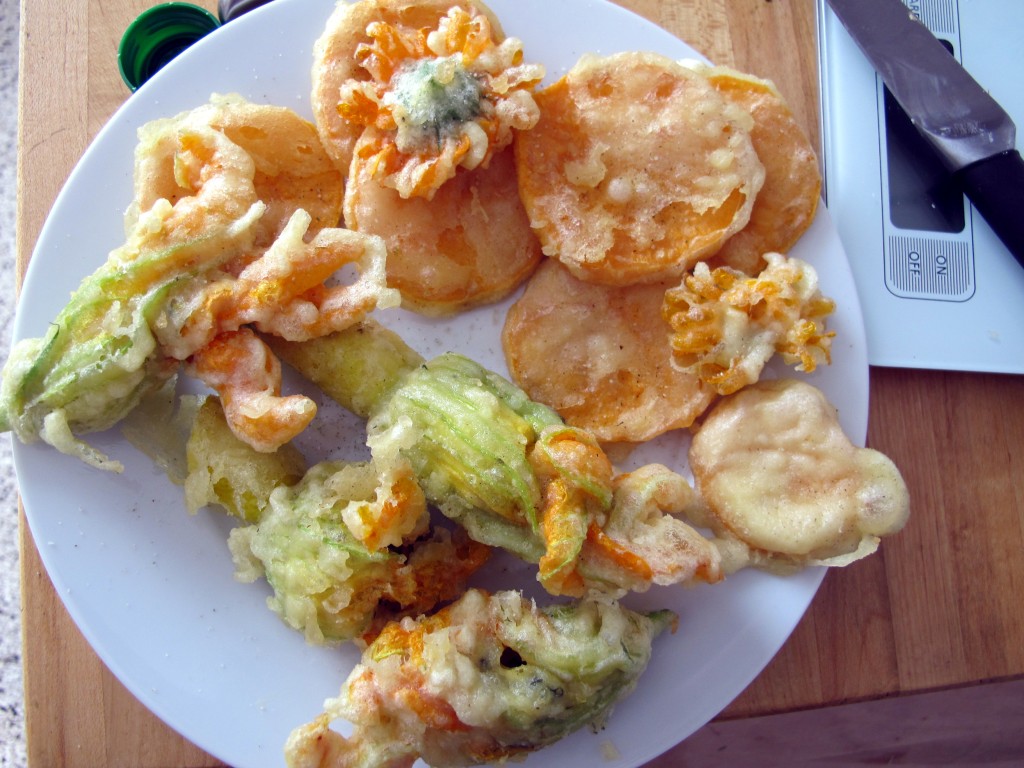 It turns out that the actual deep frying wasn’t so scary – but there is a lot to clean up. The biggest problem was that experimental cooking when you are at home alone also eventuates in solo eating. Making tempura is not so difficult, but the next time I will make sure someone else is around to help me eat it all.